From the Fair City...to the Big Apple

By: Benjamin Chase of the Plainsman - Updated: 1 month ago

HURON — As South Dakotans tuned into the Macy’s Day parade on Thanksgiving Day, many were intently looking for the South Dakota State University marching band, affectionately known as the “Pride of the Dakotas,” as they marched by the television cameras.

Among the 344 members marching in Pride uniforms on that day were two young women from the Heartland area.

McKenzie Hofer was deciding on her future college destination in summer of 2021 before her senior year at James Valley Christian High School when she first heard about the Pride from director Dr. Kevin Kessler.

“My first thought was that it sounded amazing, especially since I had eight years of playing flute in the band under my belt, but they would probably never accept someone with zero marching experience like myself,” Hofer shared.

She continued, “Happily, that fear was proven wrong. Dr. Kesser shared that a huge fraction of the Pride never marched in high school, and that they would teach me everything I needed to know.”

The history of the South Dakota State marching band traveling to perform dates back to the St. Louis World’s Fair, also known as the Louisiana Purchase Exposition, in 1904. The school’s band has traveled nationally and internationally ever since, performing for the inauguration of two United States Presidents and twice at the Rose Bowl Parade.

Jamee Kattner, a May 2021 Huron High School graduate who plays trumpet in the Pride, recalls that extra practices were immediate for Pride members that showed up for summer band camp.

“As soon as we came for summer band camp, the directors were already talking about the Macy’s Day Parade and the extra rehearsals and prep we would have to do in order to not only be ready for the parade, but also to get our football game routines ready too,” Kattner recalled. 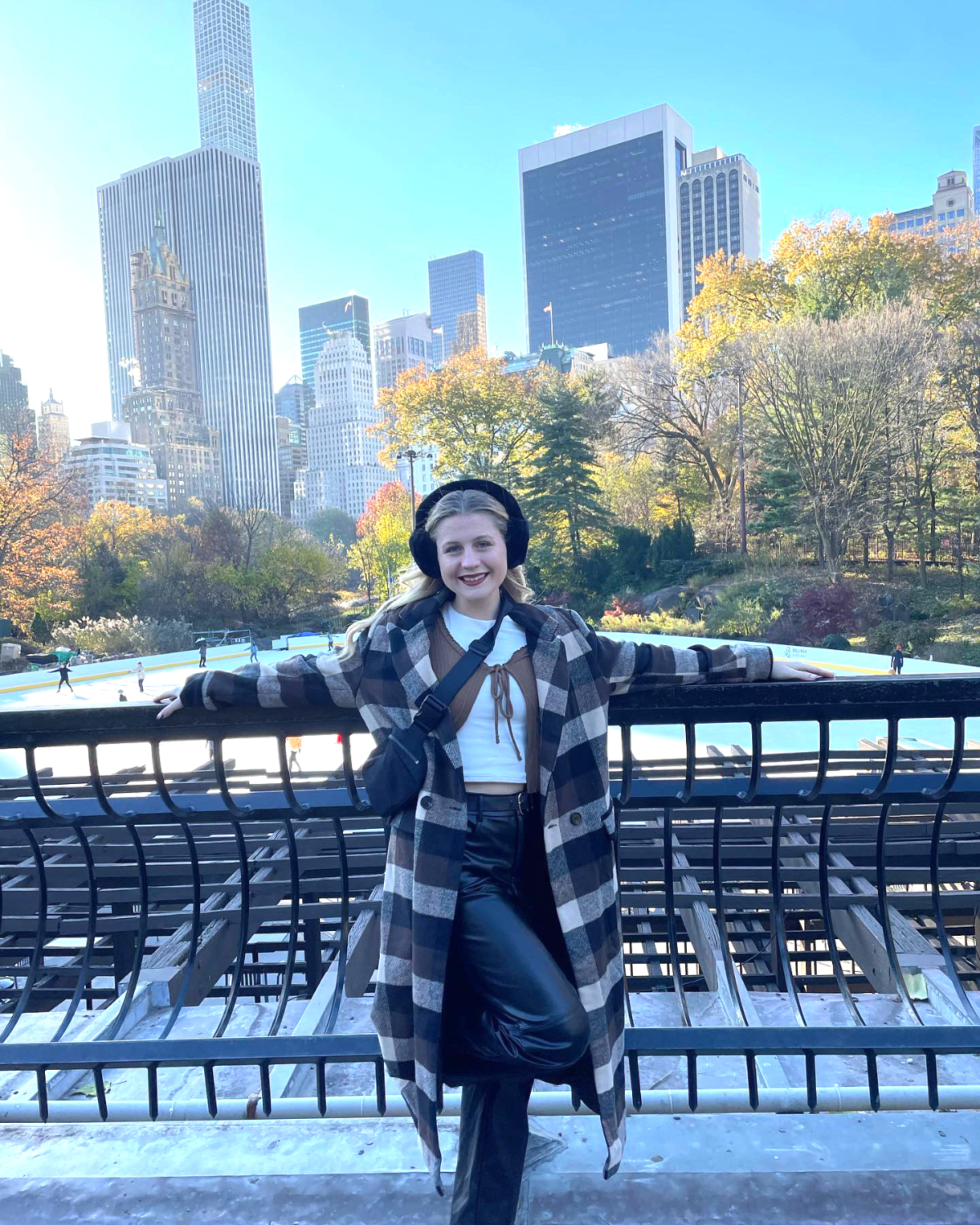 Jamee Kattner poses with a backdrop of New York’s Central Park and skyline.

Hofer recalls that her introduction to campus as a first-year student this fall included an intense integration into the Pride.

“I was your typical first-day freshman, extremely nervous walking into the concert hall and immediately finding myself among hundreds of band kids, none of whom I knew,” Hofer remembered.

“Right off the bat, Dr. Kessler and our section leaders welcomed the newest Pride members with such vigorous energy.”

Both Hofer and Kattner noted the specific practices throughout the fall to prepare for the Pride’s performance on the “star” during the parade.

The intention was to get the band in formation to squeeze the entire band into one camera shot before then continuing on in marching formation.

The trip to New York City began in a very fitting way.

“The day of our departure began at 4:30 a.m., which was an apt way to kick off a week of very little sleep,” recalled Hofer.

The band performed on the deck of the Intrepid Air, Sea, and Space Museum. The group also spent time at the Rockefeller Center, the 9/11 Memorial, and many other sites.

“The sightseeing highlight of my trip came at the Statue of Liberty and Ellis Island,” Hofer said. “My grandmother, Alie Hofer, is a Dutch immigrant who crossed the Atlantic with her family in 1948. To stand on a ferry boat and watch the waves break on Liberty Island as my grandma had done seventy-four years ago was an indescribable feeling.”

Hofer continues, “Ellis Island had a hall with computers where, for a small fee, you could search the records of those who had passed through on their immigration journey. I wish I could describe the feeling when my grandmother’s name appeared on the screen. The staff showed me the halls and staircases that she would have been sorted through. All I can say is that there were definitely happy tears.” 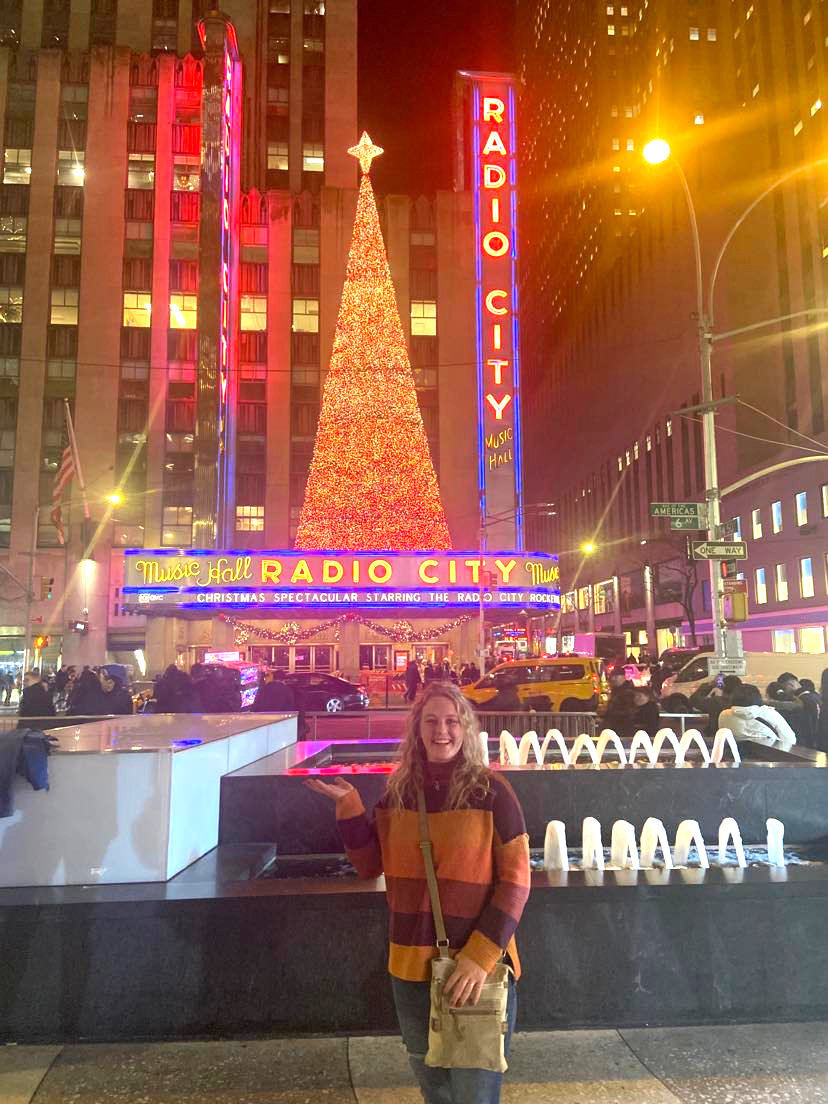 “This was my first time being in the ‘Big Apple,’” Kattner explained. “Although I loved everything we did there, my favorite by far was seeing the Rockettes. I hadn’t realized how much production goes into the Rockettes. They have a full pit orchestra, a 3-D opening video, singers, drones and much more! And I can’t forget about Jimmy Fallon giving me a high-five while we were waiting to take our parade spots!”

Everyone went to bed early Wednesday evening to be ready for a wakeup call at 2:30 a.m. and to load buses to head to the morning rehearsal with NBC producers at 4 a.m. Between the rehearsal and marching, a buffet breakfast was served, and some even snuck in a nap!

Thousands of South Dakotans (and plenty from other states and other nations) have shared the Pride’s Thanksgiving Day performance videos since that day. As the SDSU Jackrabbit football team completed the march toward the Football Championship Series title game in Frisco, Texas, on January 8, the Pride has been at each game. And the band will be at the Jan. 8 game, getting fans excited and cheering on the Jacks.

Reflecting on her big first semester with the Pride, Hofer sums up the experience best.

“Music brings people together, and the Pride has reinforced that for me in so many ways - from the sheer impact that a wall of pep music has on a football game atmosphere to the close bonds formed with my fellow bandmates!”

First of three 2023 'Coffee with Legislators' set for Saturday