Making a difference in Huron

By: Crystal Pugsley of the Plainsman - Updated: 2 weeks ago

HURON — Snowstorms and bitter cold over the holiday season had a dramatic effect on yearly fundraising efforts by the Salvation Army to help support their programs for the year.

“Our Christmas basket program was even a little shy compared to last year,” Lt. Justin Bluer of the Salvation Army said. “We’re quite a bit short.

“We started off doing really, really well for our kettle season,” he added. “I thought we would be ahead of our goal. I think we would be doing pretty good if we hadn’t had to pull our kettles from Walmart because of the bitter cold.”

One of the new programs  Bluer has been working to establish in Huron offers free music lessons to youth.

Right now, they are working with youth in their afterschool program, but he hopes to open it up to any child in the community sometime next month.

“Music is so important, it opens up so many opportunities,” he said.

Bluer and his wife, Shannon, worked with officers at the Salvation Army in Elgin, Ill., before they were appointed to serve in Huron last June. In Elgin, they had weekly Kid Jams, beginning with singing before splitting up into five different music classes.

“My wife and I have big dreams to bring music here,” he said. “At this point we have three good keyboards that we’ve accumulated, and we’re getting five on loan from our divisional headquarters. We do have a keyboard teacher coming once a week for the afterschool program, and we also have a guitar teacher coming.

“We need a few more guitars, and I would like to expand into some brass instruments,” said Bluer, who can strum a few bars on guitar. “Hopefully, by next month, we want to open it up to community kids to come in for a one hour class every Tuesday,” he added. “I want it to be free music lessons for kids.”

Bluer invited students active in the school district band and orchestra to consider sharing their talents as instructors for young people in the music program.

“I know our congregation loves it when we have the Divisional Corps come in with brass to play for church,” Bluer said. “Every month they come here and do some sort of service project for us.”

Starting any new program — like the weekly music lessons — takes a lot of effort and attention. “The hardest part is just starting it,” he added. “It’s still in the experimental phase in our corps.” 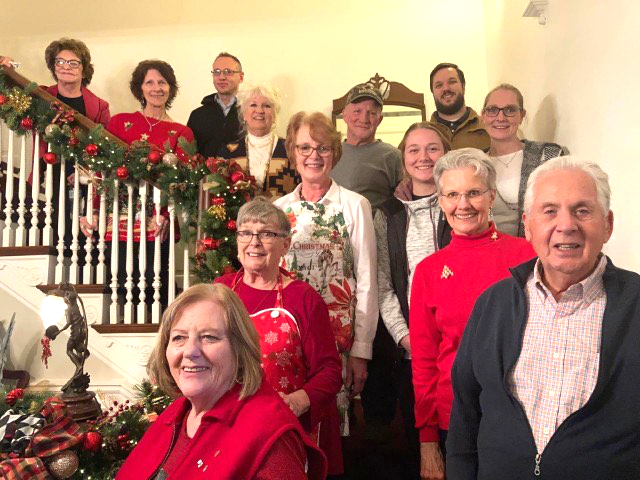 A fundraiser through First Congregational Church raised more than $8,000 for the Salvation Army — even though it had to be postponed until after Christmas due to extreme weather.

Bluer and his family arrived in Huron last summer, so this was their first Christmas fundraising experience in the community. “I’ve heard we had more families we provided for this year, as well as a few more children for the Angel Tree. It’s hard for me to compare it since I wasn’t here last year.

“It definitely makes it that we can’t do as much for outreach,” Bluer said. “A lot of times people think the Christmas fundraiser season goes just for Christmas. But that is the biggest fundraiser of the year for the Salvation Army. A lot of our funds that we use to help the community throughout the year all comes from our Christmas fundraising.”

Bluer said they help people passing through town with no where to stay by giving them a night or two at a motel, and they’ve also supplied gas vouchers and met other needs people may have.

“We’ve just recently helped somebody with a water bill shutoff right before the holidays,” Bluer said. “We have a unique ministry. We try to help out in different areas than just food.”

Bluer said they are hoping to secure funding to bring in another case worker, which the Salvation Army calls Pathway of Hope, to build a relationship with clients and help better manage their resources, as well as point them to resources available in the community.

“A lot of times we see people who haven’t learned to manage their finances,” he said. “We can help them with small goals and small steps to alleviate that burden.”

Bluer said he was extremely grateful that the firefighters held their annual blitz on Dakota Avenue to collect money from motorists — even though it was later than normal because of the bitter cold before Christmas.

Another fundriser for through First Congregational Church was a tour of the historic Campbell home owned by Vaughn Kessler and Nina Akin at 726 Dakota Ave. S. Even though it had to be postponed until after Christmas due to a winter storm, they still brought in more than $8,000 to help the Salvation Army.

Although volunteers are an essential part of the success of the Salvation Army, there is always a need for funding to support those programs and numerous outreach efforts.